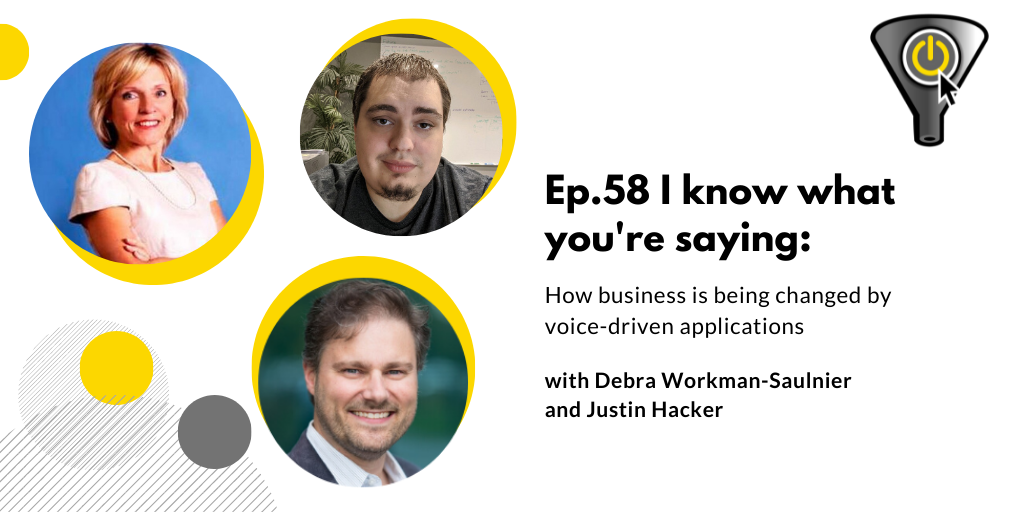 Voice technology is so prevalent, I’m giving a disclaimer on this episode that we’ll refer to some voice assistants by name, so smart-speakers or digital assistants within earshot will, you know, notice.

Many of us may be users of voice recognition, but few of us know how to use it for marketing our companies. Coming up with applications is hard, with a platform whose interface is invisible. Few of us are exposed to the artificial intelligence behind it, so we can’t picture what we’d do with it. As the Steve Jobs quote goes, “A lot of times, people don’t know what they want until you show it to them.”

To help us with this, we’ll talk with a company that launched a voice AI tool, and is happy to peel back the curtain on how this all works. Our guests are both from UCLab, a  software development firm in Ottawa, where Debra is a Partner and Justin is CEO.

Listen for how this technology began with simple single-word commands, to where it can now process whole paragraphs containing advanced grammar structures. You’ll learn how it goes beyond turning itself on or off, to interacting with calendars and documents. They will share  how AI monitors which points someone brings up on a call and whether it was said in a positive or negative way, so before you talk again, you’re ready for that objection. Also hear how detecting different human voices lets it assist with meetings by pulling out of the discussion, email them to people action items.

Bound to be some good ideas here for how to use this in your marketing or your work life.

Company Debra and Justin are part of, UCLabs