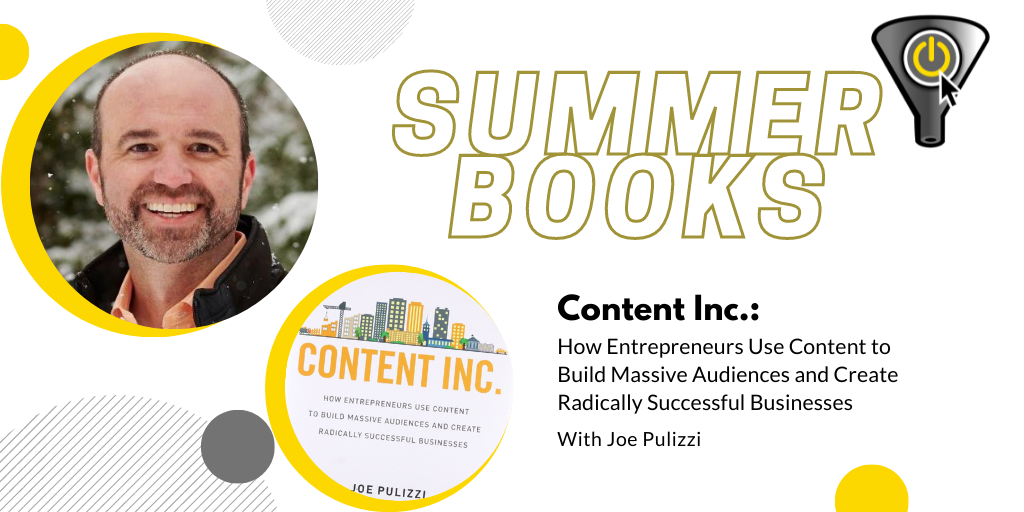 The book we talk about in this show is #15 on the Amazon Best Seller list for Internet Marketing. Not to take anything away from past guests, but if you only listen to one of the 50 interviews we have done, I hope that you choose this one.

I think most marketers have heard of the Content Marketing Institute.  The public figure at the centre of CMI, Joe Pulizzi, started it all with a blog post on April 26, 2007 “Why Content Marketing” His hypothesis in 2007 was that companies who put content on the internet would build relationships that blossom into future customers. He then went about literally putting out content that taught others how to do this. Once they came to the CMI site and got this free content, he would sell them everything from newsletters, to magazines, to training, and an annual Content Marketing World event.

For me personally, the story picks up in 2014 when I started listening to Joe’s podcast with  Robert Rose  on the podcast series, This Old Marketing. I found this giving-away-expertise tactic to be quite unorthodox, as I was accustomed to thinking that companies should mainly communicate with their audience through advertising. Listening to them influenced how I’ve come to see content marketing’s value.

While CMI was evangelizing how to grow a business on content, Joe didn’t keep any secret about how well he was doing with growing his business. Already a bestselling author of several books, he came out in 2015 with Content Inc, that gave out the blueprint he was using. A year after it came out, he sold CMI in 2016 to the International Events company UBI.

He may have finished with CMI, but over the next few years, he stayed close to both corporate and entrepreneurial content creators. His keen focus on them led him to pitch his publisher on a second edition of the book, which  rounds out the model by sharing the rest of his own journey of monetizing a Content-based business. the second edition that came out this year. I was amazed as I read it; so many new examples, all the updates on marketing channels, it’s a total overhaul from the first edition.

This is one high-energy conversation. I was already pumped to talk to Joe, I’m not going to lie, and it seems we both got pretty keyed up as we spoke.

Shift away from the Glengarry Glenross revenue-generation model

To get another perspective on audience-building, see Kevin Kelly’s post on 1000 true fans